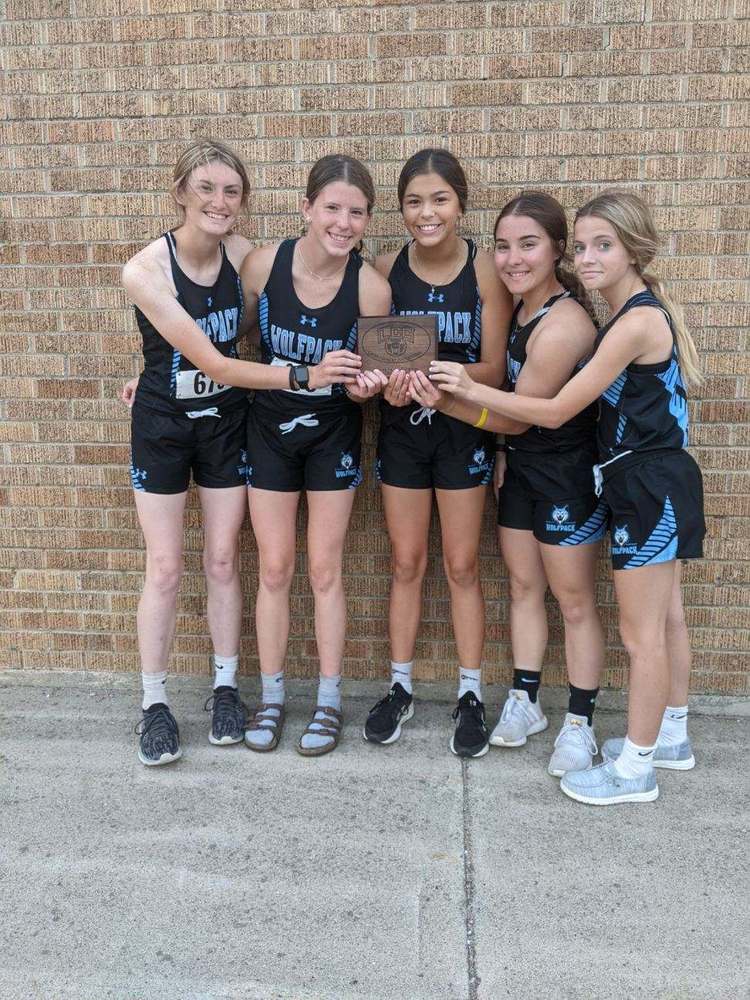 The Tri County Northeast Girls earned their first ever trophy with a “grind it out” effort on Thursday, September 8th, at the Laurel-Concord-Coleridge Invite.

Coming off last week’s heat and struggles, the heat again would play a factor, but the team responded by supporting efforts from all.

Rhyanne Mackling coasted to a medal and second-place finish with a time of 24:22.49.  Mackling had heat issues a week ago, and the second-place run was seen as an effort to get to the finish line without relapse.

Freshmen, Alejandra Hermosillo, was again solid, but was running on a slightly injured foot.  Hermosillo posted a seventh-place medaling time of 26:25.27.  It was Alejandra’s second consecutive meet with a medaling performance.

Bre Millard, seemingly had a ninth or tenth place finish in hand with approximately 200 meters left and fell out of the race due to heat related issues.

That set the stage for the two other Wolfpack runners.  Freshmen, Jenni Olson gave a personal best effort to secure a third score for the Wolfpack, with at time of 31.29.88.  Her place was good enough to propel the team to a runner-up plaque.

Junior, Shantel Miller, clipped almost two minutes off her prior best, coming in just behind Olson, clocking a 31:44.47 time.

Gabe Franklin, the lone Wolfpack boy runner, cut his personal best time to 26:32.37.  He placed 30th in the field.

“Several good things happened today.  Strategically, the girls followed a blueprint of being a little more in control of how to run their races.  Although the heat got us a little, everyone did a much better job of managing it and it meant a good day overall all.  4 of 6 athletes posted personal bests and two medalists as a result.  We are still very much a work in progress, and we hope that continued hard work will pay off at season’s end.  Congratulations team!”